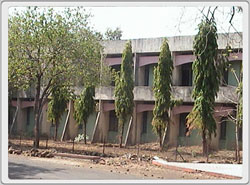 and examining body. But, the academia were convinced that the university should not remain just as an examination taking body but must also involve itself into teaching and research. With the establishment of the Department of Political Science, in the year1945, the long cherished dream of the university for undertaking post graduate studies and research was realized.

Yet this journey of the establishment of the department was not without hurdles and much of the time it only remained the topic of reiteration of its acute need in the Annual Reports, at Court meetings and during Convocation speeches. The major hurdle was finance, which was further aggravated with the world war when government grants were subjected to cuts on account of financial stringency and there was no possibility of any additional grants. Under these circumstances the only course open to the university was to appeal and approach he private benefactors for supporting the development especially the teaching at postgraduate level and research.

Thus the first major endowment of this type was founded in 1943-44 and it aimed at the collection of Rs.3 Lakhs to be associated with the name of Dr. E.Raghvendra Rao, the ex-governor and chancellor of the university in 1936. A sum of Rs. 2,20,000 was collected by the end of the year 1944-45 and it was decided to institute a university Professorship in sociology and political science to be financed from this endowment. Thus came into existence the first postgraduate teaching department of the university in the form of the department of Political Science with Prof. S.V. Puntambekar B.A. (Hons.) Oxon, M.A. Oxon, Bar at Law, as its head.

Educated at Mumbai and Nagpur

Recipient of ICSSR Fellowship for Ph.D. and Foreign Travel Grant in 1990

Invited as Resource Person, Guest faculty and Chairman of Technical sessions in seminars/conferences

Member of Board of Studies/RRC in Mumbai University, North Maharashtra University (Jalgaon), Dr. B. A. Marathwada University (Aurangabad) and Kalidas Sanskrit University (Ramtek)

Member of Editorial Board for –- Journal of Maharashtra Political Science Association (Jalgaon); Review of Politics of Veer Kumvar Singh University (Ara-Bihar), Journal of Asia For Democracy and Development of the Council for Peace, Development & Cultural Unity (Morena); Journal of Public Affairs & Governance (Delhi); Journal of LAD College (Nagpur) and Journal of SP College of Law (Chandrapur)

Worked as Unit Coordinator and Editor (Nagpur Unit) of Encyclopaedia of Hinduism undertaken by University of North Carolina and India Heritage Research Foundation (USA) – 2001. Also member of Maharashtra School Text-book Board for Civics in 2007-8 and 2013-15.

His areas of special interest are Political Philosophy and Public Policy, Constitutionalism, affirmative Action and Theoretical Aspects of International Politics.

Before joining the department he has been working at the Centre for Policy Research, New Delhi as a Research Associate to Dr. Shubhash Kashyap on the project ‘Political Reforms’. He has been writing extensively on various issues under him and had also assisted him in writing a chapter as a contribution to an International book project on International Criminal Tribunals.

Later he joined as an Assistant professor in Political Science at the National Law Institute University, Bhopal.

He was associated in the co-coordination of the Five days Teaching Session on “International Humanitarian and Refugee Law” in Participation with the International Committee of the Red Cross and the United Nations High Commission for Refugees. He also was the co-coordinator under the ‘Excess to Justice’ programme in the disbursement of the Pro-Rata amount to the victims of the Bhopal Gas Disaster, in assistance to the High Court of Bhopal.

After joining Nagpur University he had been actively engaged in organizing various academic activities such as seminars, guest lectures, workshops and teaching session both National and International, prominently are, seminar on Global Terrorism in 2005, and one day seminar on Atrocities against Dalits in 2007. He has also organized a two days teaching session in 2006 in the department for the first time on “International Humanitarian Laws” with the participation of the International Committee of the Red Cross. He also helped in organizing the 44th Political Science Conference held in the department.

He also led the team of Political Science students of Nagpur University for the 35th Parliamentary Training Course organized by the Commonwealth Parliamentary Association, Maharashtra branch in 2004.

Apart from organizing various programmes he has been delivering lectures on various topical issues of International and National Concerns at various forums including the issues of the “Expansion of the Security Council” at the 44th annual conference of Political Science Teachers, “Indo- US Relations in historical perspective” at Hislop College Nagpur, “Contemporary Theories of International Relations”; and “Need for Reservation Policy”, at the Refresher course of the Political Science Sponsored by the UGC Academic Staff College; also delivered as a resource person a lecture on “Indo-China Relations” organized by Chetna Manch.

He also has been associated with the Tata Institute of Social Sciences to conduct surveys of their projects on “Livelihoods, Employment, Sustainable Development: Initiative towards Improving Skills and Employability of People” and “Food and Drug Safety”. In that process he has been attending workshops organized at the Institute on various occasions.

Recently, he was invited to attend the 8 days South Asia Teaching Session on International Humanitarian Law, organized by the International Committee of the Red Cross in participation with NALSAR Law School Hyderabad in April 2007.